The Mississippi River inspired me.

As we followed the river, watched it grow and change, I was able to use it as a metaphor. Here I talked about the tenuous, fragile nature of dreams. 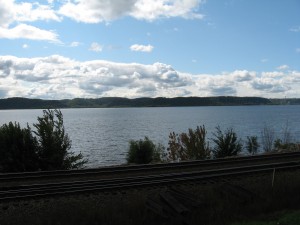 We crossed the Mississippi three times during the first day. I recall thinking that it was a bit disappointing.

Even thirty miles from its source, the great river offers little clue of its eventual magnitude. It’s nothing more than a stream.

We passed a lot of small streams in northern Minnesota. There was no way of predicting which ones would become rivers, which would disappear, and which one would become one of the world’s great rivers.

I think dreams are like that. When they begin, dreams look mostly alike. There’s no knowing which will fail, which will succeed, and which will become Apple or Microsoft.

It’s easy to look back and pretend the wildly successful dreams were inevitable. You look at Google or Facebook today and it’s hard to imagine that they wouldn’t have been as wildly successful as they became. But at the beginning they appeared no different than thousands of other apparently crazy notions.

The message, I think, is not to give up on dreams too soon. I wonder how many amazing ideas have died simply because someone looked at them in their infancy and decided they couldn’t ever amount to anything.

You have to dream, and you have to believe in the dream enough to see it through. It may die anyway, for any number of reasons. But you can’t know at the beginning how it’ll play out.

Dreaming is risky business. Many, even most, don’t become great rivers.

But you can’t tell which stream will become a great river, or which dream will change the world, unless you’re willing to take the risk and head downstream as far as the dream will take you.

I absolutely believe in following big dreams. I’m also convinced you can’t know in advance where, or how far, or in which direction, your dream might take you.

I’ve got more to say about this. We’ll re-visit later, and it’s a big topic in my book RICH’S RIDE: Hope Changes What’s Possible.

God’s got a plan. Whenever you and I think we have it figured out, we’re likely to be surprised.

Click the button to get free updates delivered directly to your email inbox.