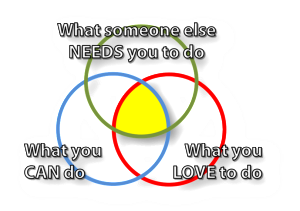 Is every dream worth following?

My friend Paul Merrill wrote about someone’s dream to restore a rusty 1969 Thunderbird and concluded It’s Not Going To Happen.

Paul’s conclusion: It’s healthy to real­ize that some dreams are not going to hap­pen.

What do you think?

It’s easy to become enamored with a cool idea—restoring a car, starting a nonprofit, traveling the world, whatever it happens to be for you. At some point the very fact that you’ve thought about it so much means you can’t possibly let it go. So you hang on because releasing would feel like failure.

Paul’s right. Clinging to a dream just because it’s always been there isn’t healthy. If you’ve got any of those old dreams lying around collecting dust and guilt, perhaps it’s time to set them—and you—free.

I’ve used this definition and the circles to represent my notion of a dream.

A dream is the God-inspired desire to share your unique gifts and passions to serve others and change the world.

Some might ask how restoring an old car serves others. I’d say the activity isn’t the point. When someone invests their skill and passion in a project, they’re creating art. The world absolutely needs your art. That’s why you’re here, and God will use it for good.

Dreams shouldn’t be casually dismissed, just as they shouldn’t be followed on a whim. Dreams have costs. So do surrendering those dreams. Jesus offered some guidance (Luke 14:25-33) about the importance of counting costs.

Jesus came to bring freedom. Sometimes it’s freedom to do your art with passion and joy.

Click the button to get free updates delivered directly to your email inbox.